TUNICA Magazine is a publication featuring the work of leading artists and designers from around the world. The magazine was born from a successful Kickstarter campaign initiated in 2012. One thing that makes this publication interesting, aside from the excellent content, is that each issue is guest designed by a different graphic design studio.

It’s a delight to see the unorthodox way Studio Lin have approached the third issue. Each spread is divided into three panels, rather than following a more traditional format, allowing them to squeeze the maximum number of artists and designers into this issue as possible. It’s a clever solution that benefits the reader, while also ensuring the third issue has its very own look. 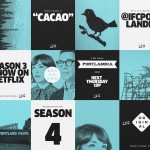