The Outpost is a gorgeous new magazine from Lebanon that ‘aims to ignite a socio-cultural renaissance in the Arab world through inspiring its readers to explore a world of possibilities’. Issue 01 builds on the success of the Launch Issue and examines where the Arab world is at and how it can move forward by discussing important ‘social, cultural and economic issues within the scope of Transport, Movement, and Evolution’.

The magazine itself is a beautiful example of great editorial design, which is the result of an ongoing collaboration between Sants Serif, Gema Navarro and The Outpost’s Editor in Chief, Ibrahim Nehme. It also contains beautiful work by illustrators, photographers and designers from the Middle East, in addition to articles written by talented investigative journalists who have all contributed to the magazine’s early and ongoing success.

The magazine can be purchased from selected bookstores throughout the Middle East and Antoine Online. 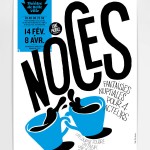 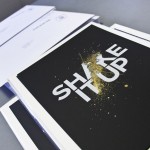 Shake It Up Print by Craig Ward and Dan Mather Screenprint