Love this self-initiated work by Romain Roger, a creative director based in Paris, for which he has chosen to experiment with three dimensional typography. Each letter is created from a multitude of three dimensional forms that transition through time and space, but what I actually like most are the stills taken from the video.

Each image possesses a somewhat abstract quality and it’s often difficult to identify what letter is being represented, but the beauty of this works lies in the way these individual forms are juxtaposed together. There’s a sense of chaos that’s ultimately contrasted by the underlying order of each composition. Add shiny white surfaces contrasted against a stark black background and the final result is some serious eye candy! 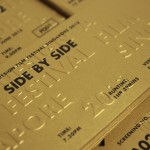 A Design Film Festival 2013 by Anonymous 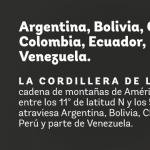 Andes by Daniel Hernández and The Latinotype Foundry