Associated Typographics are a type foundry who produce fonts that are available to purchase commercially, but they also do a lot of custom type work for the likes of Nike, Google and Disney. Their most recent font release is Skol, ‘a delinquent typeface containing eight distinctive weights’. The thing about Skol is that it’s a hardy robust stencil typeface, but it’s… a little ugly. However this trait adds to it’s overall hardy character and makes it perfect for projects that demand a more rugged approach.

To celebrate its release Associated Typographics have been publishing a series of images promoting Skol on their Tumblr, which were a collaboration between Michael Cina and Travis Stearn. The entire family is currently available from MyFonts and is on sale for a limited time. 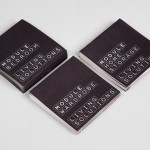