Dimo Trifonov has such a varied portfolio of work he simply refers to himself as a ‘taste director’ to describe his numerous ‘job functions in advertising, marketing, publishing, film and television and the Internet’. Some notable projects include work for Nokia and Pokke, an online service he cofounded which connects those who have moved to a new city with other like-minded people.

One thing that is consistent throughout his work though is experimentation, whether it be with illustration styles, graphic forms or typography. This series of posters that were created as a typographic experiment is a personal favourite!

More images after the jump. 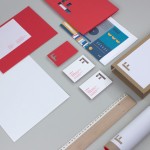