Natasha Jen of Pentagram collaborated with SOFTlab on the identity and environmental graphics for ‘Gimme More: Is Augmented Reality the Next Medium?‘, an exhibition that appeared at Eyebeam Art+Technology Center in 2013.

Originally developed by the EPFL+ECAL Lab at the Ecole polytechnique fédérale de Lausanne in Switzerland the exhibition featured the work of seven artists who are experimenting with augmented reality (AR).

Visitors are introduced to the subject via typographic installations in which triangular shapes were cut or projected to create letterforms that were dynamic and constantly changing. It’s a pretty amazing effect and one that beautifully reflects the dynamic nature and possibilities offered by AR.

For more information and images follow the link below. 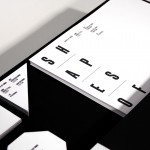 Shape Of Things by Alfio Mazzei, Peter Rossi and RM&CO