Designed Space is a blog founded by West Chester University students Billy Heemer and Michael Warren, which documents the creative spaces of studios and freelance designers. It attempts to explore the differences and commonalities between such creative spaces by sharing the workspaces of notable studios and designers such as ManvsMachine, Lundgren + Lindqvist and Hey Days. Notable projects by each studio or designer are also included and its interesting to see the parallels between the work and the space in which it was designed. Designed Space is a great read and an excellent resource so I recommend checking it out. 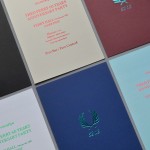