It’s no secret by now that Sagmeister & Walsh have a new website created by Liam Crean and Emil Olsson that’s full of new work, in addition to a newly renovated studio and business stationery. While all of the NYC studio’s work is exceptional, I particularly like this recent project for Aizone, which utilised the human body as a canvas for hand painted messages. The resulting images became part of an advertising campaign that appeared in magazines, newspapers and billboards throughout Lebanon. This beautiful work is typical of Sagmeister & Walsh’s approach, which routinely blurs the boundaries between fine art, graphic design and advertising. 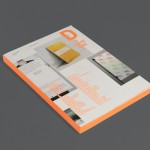 I Love DIN by TwoPoints.net